Rene Caisse, (pronounced Reen Case) a Canadian nurse, helped bring Essiac into prominence in the early 20th century. (Essiac is Caisse spelled backwards). She was instrumental in its uses in clinical settings after witnessing the healing powers of Essiac, which could be described as nothing short of a miracle. 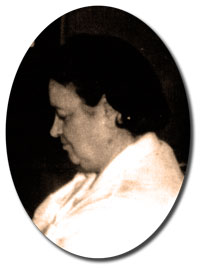 Her first patient was her aunt that had been diagnosed with terminal stomach cancer and given 6 months to live. After two months of drinking an Essiac brew, she had recovered fully and went on to live another 20 years. Another of Nurse Caisse’s patients not only reversed her cancer but her insulin-dependent diabetes as well.

It is well documented that Dr. Frederick Banting, one of the discoverers of insulin, tested Essiac with his patients and reported that “Essiac seems to regenerate the ability of the pancreas to produce insulin.”

In 1959, Rene Caisse began treating terminally ill patients at the Brusch Medical Center in Cambridge, Massachusetts while supervising no less than 18 doctors. Dr. Charles Brusch, not only operated his own medical research center, he was also the personal physician of President John F. Kennedy. Dr. Brusch was a leading activist and proponent of natural medicine at a time when main street medicine didn’t know how to cope with “thinking outside the box.”

After three months of treating these patients it was determined that, on average, the size of their tumors shrank due to a change in cellular formations and the patients began to regain weight noticeably. None of these doctors proclaimed Essiac to be a cure but once the research had concluded they did state Essiac was of definite benefit. Dr. Brusch wrote a notarized letter in 1990 attesting to the efficacy of Essiac formula and how it alone cured his very own cancer some years after the research had concluded.

Essiac is a natural formulation passed on to Nurse Caisse from a Native American Shaman (medicine man) from the Ojibwa Indian Tribe. The original formula consisted of four herbs, turkey rhubarb, slippery elm, sheep sorrel and burdock root. Each of these herbs has their own special abilities to aid our bodies. For example, burdock root increases liver function and insulin production, sheep sorrel is good for liver function as well and toning the heart, turkey rhubarb cleanses the bowels and slippery elm is great for wound healing and protecting the body from toxins that are releases as the body heals itself. Herbalists believe that these four herbs, while being awesome individually, work together synergistically to reverse devastating disease conditions such as cancer and diabetes.

The purpose of Nurse Caisse working at the Brusch Medical Center in Massachusetts was to search for an improved, more potent and more effective version of Essiac from the original 4 herbs given to her a half century before.

After years of research along side of Dr. Brusch, they concluded that a new eight herb version improved the formula that worked more effectively and yielded the most successful results. They continued to use the four original herbs but added Blessed Thistle, Red Clover, Watercress and Kelp. Blessed thistle is widely used to treat gallbladder and liver disease, Red Clover provides the richest sources of isoflavones, which may prevent the growth of carcinoma cells. Watercress is known to inhibit the growth of pathogenic bacteria in the intestines while Kelp, a natural source of potassium, iodine, magnesium, calcium & iron, help to maintain the proper metabolism in your cells.

In 2008, Herbal Balance for Life Inc. licensed the rights to the formula from the Paulhus family, so they could create a popular, more convenient and portable way of taking Essiac. Herbal Balance believed that people in the 21 century don’t have the time, inclination or stomach for brewing this old fashion remedy since it is time consuming, needs to be refrigerated, plus the need to hand measure each dosage that had an awful taste was simply too burdensome for this new fast pace generation..

Are soft gels as potent and effective as brewed Essiac?

The bio chemists, pharmaceutical engineers and biologists all agree the formulation of Essiac in a soft gel is identical to that of the brewed version of Essiac. As a matter of fact, the easy to swallow soft gels need no special storage, no brewing, no measuring and they are totally portable so it is easy to take with you on vacation or on a business trip. The bonus is that soft gels offer a much more accurate way of taking Essiac. While home brewed Essiac can have too much or too little water, and sometimes not even distilled water is use which weakens its strength, plus measuring one ounce at a time, can also be inaccurate. Soft gels are robotically manufactured by high tech machinery therefore; every dose is 100% accurate.

Medical science definitely has its place in our lives. There is no question that the best acute care in the world can be found in nations that have a western medical model but we can ill afford to be one sided or narrow minded in our approach to devastating chronic disease conditions. Consider Essiac as a part of your health care regimen to give your body a healing chance in a non-toxic way. In a written document, in 1982 by Dr Brusch, sums up his research and work with essiac, "The results we obtained with thousands of patients, races, sexes, and ages, with all types of cancer definitely proves essiac to be cure for cancer. Studies done in four labs in the U.S. and one or more in Canada, also fortify this claim." 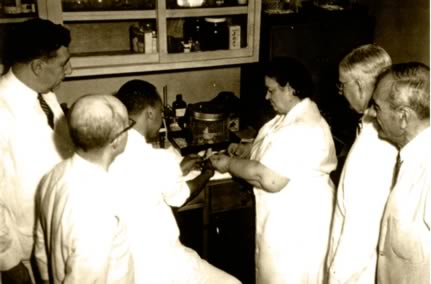 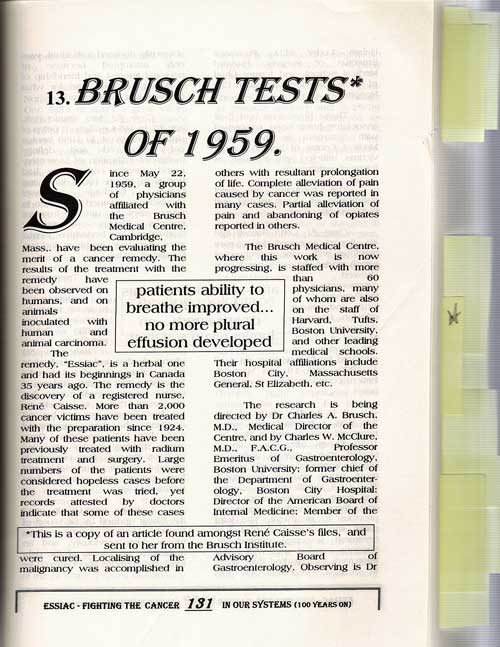 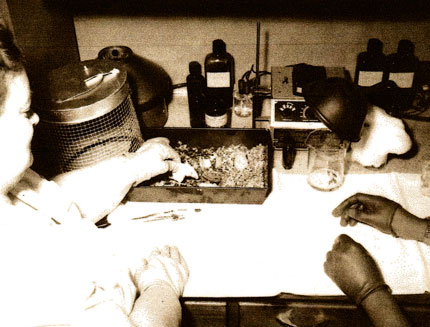 Started the first prepaid medical plan in the nation (the precursor to Medicare) was the first to conduct acupuncture research in the state of Massachusetts.

Dr. Brusch was also the personal physician and confidant to President John F. Kennedy, was awarded in 1981 by the Post –Gazette as Humanitarian of the year, was knighted by Pope Paul Vl, published numerous articles on arthritis, nutrition and allergies and his research of Essiac saved thousands of lives, including his own. Rene Caisse injects mice for experimentation at the Brusch Medical Centre, Cambridge MA 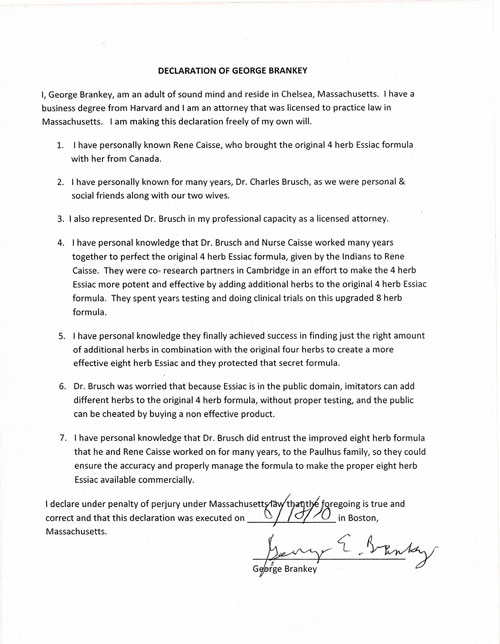 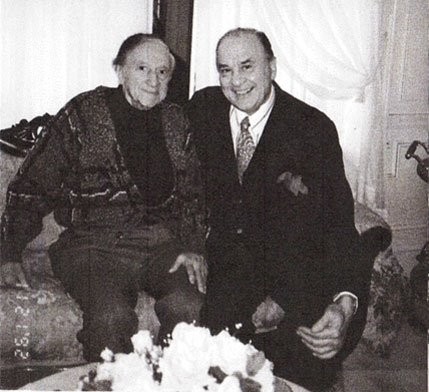 The Relationship Continues Into Today 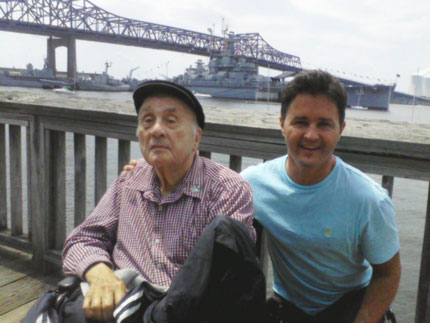 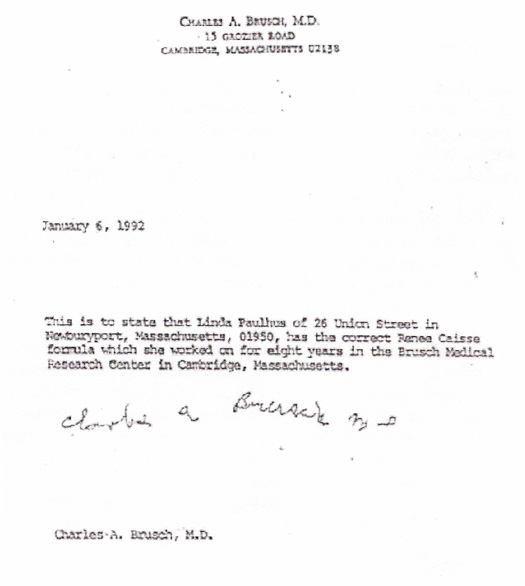